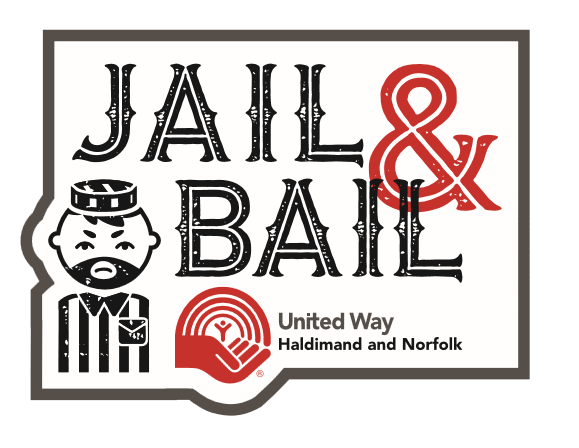 On September 19, we kicked off our 2019 campaign with over $10,000 raised at our annual Jail and Bail event in Simcoe and Cayuga. The weather was perfect and the day was full of fun, with creative crimes such as ‘Never Giving a Straight Answer,’ ‘Cow Tipping,’ and ‘Failing to Buy the Office Lunch.’ We had new faces at the events this year but by far the favourite were a pair of Jack Russels, Phinn and Dino, accompanied by their owner Sandie Heirwegh. This trio came away with ‘Most Creative Crime’ and ‘Most Funds Raised’ for Haldimand. Taking the prize for ‘Best Costume’ was David Sykes for his crime of ‘Computer Hacking.’
In Norfolk, the enthusiastic team from the Norfolk Association for Community Living took home the ‘Most Funds Raised’ award, Katherine Whitney won ‘Best Costume’ and Ron Tomczak was awarded ‘Most Creative Crime.’

It was a great day and Brittany Burley, our Executive Director, announced our campaign goal in a very new way.

“More important to us than the dollars raised, is the impact these funds have on the community, which is why this year we are going to announce our annual campaign goal as an impact goal of what we plan to achieve in the community!”

Our goal is to help 16,000 people in Haldimand and Norfolk. This number includes mental health and wellness supports for 2,000 people, educational programs for 2,500 children, community programs for 3,000 seniors and 8,000 people moving themselves from poverty to possibility. Burley stated,

“This is only possible with the support from the communities in which we live.”

We would like to extend a special thanks to the following: McDonald’s (Simcoe) for coffee, Tim Hortons (Cayuga) for coffee and prizes, OPP Norfolk for their time and fingerprinting skills, Ron Tomczak the FauxPP Officer, Turkstra Lumber (Simcoe) for creating the jail cell, Community Addiction and Mental Health Services of Haldimand and Norfolk for Photos & Presentation, Adam Veri for the logo design, MyFM for the sound system, and Foodland (Cayuga) and Shopper’s Drugmart (Simcoe) for the use of their parking lot.